While we still have you thinking about yummy things (i.e. Salchichón), think with us about coffee, carbonated drinks, and Krispy Kreme.  What do they all have in common?  They are all ubiquitous in the U.S., they are all represented by at least one brand name that originated in North Carolina (good things also come from home!), and they all play a part in the social fabric of Americans.  After all, who has never tasted a warm, sweet Krispy Kreme glazed donut or downed a cold can of Pepsi on a hot summer day or enjoyed a simmering cup of coffee?  (North Carolina’s version of Starbuck’s is Port City Java.)

In addition to the personal enjoyment that people get from consuming them, we often use them as instruments to enhance our social interaction.  When we want to get together with somebody to talk about matters that are important to both of us, we will often invite them out for coffee.  When we have a group picnic, soft drinks nearly always form an essential part of the menu.  Of course, donuts are reserved for morning meetings, since, together with coffee, they provide some incentive for people to come to an event at such an early hour.  They also work together to keep people awake! 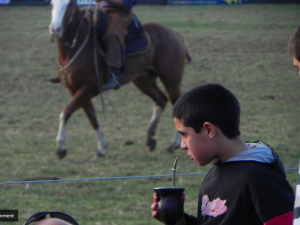 Like Americans (and, for that matter, people everywhere), Uruguayans are very sociable.  The instrument that they use, however, to enhance their social interaction is quite distinct from any of the instruments that we mentioned above.  While yerba mate (pronounced yer-bah mah-tay) is a drink, in Uruguay, it is considered to be much more than a drink, even a social institution.  How could a drink obtain so much importance among Uruguayans?  To answer that question, you would have to understand yerba mate’s culture.

Like tea, yerba mate is a drink that is derived from steeping its leaves in warm water.  The leaves themselves are found on a type of holly tree that is cultivated in South American rainforests.  It tastes somewhat like green tea and shares with coffee and tea the characteristic of being a good source of caffeine.  That, however, is the extent of the similarities between yerba mate and these two drinks.

What really makes yerba mate so different is the way in which it is most often served.  Generally, it is not consumed alone, but in a group.  The person, cebador, who has invited the group to “matear”, is responsible to prepare it.  He does so in a hollow gourd that is also called a “mate”.  The first step is to fill the gourd about two-thirds of the way with mate leaves.  As we will see, it is important to do so in such a way that they slope up from one side to the other.  Then he pours the warm, not boiling water, into the gourd on the lower side of the leaves, filling it about half way.  Next, he carefully inserts the drinking tube, “la bombilla”, into the leaves on the lower side of the slope.

Be on the lookout soon for Part II of this series of articles on Uruguay’s National Drink – Yerba Mate.