Any Mac user who has ever been forced to work with a PC would be able to relate to such a situation.  A dialogue between a Mac user and a PC user might go something like this:

A Mac and a PC are similar in that they are both computers.  They both have a CPU, a keyboard, a monitor, and a mouse.  What makes them different is the fact that they use different operating systems.  While a number of the features of those systems are similar enough that the Mac user could quickly begin doing some basic tasks on a PC, they are different enough that it would require the Mac user to go through a learning curve to learn how to do complex tasks.  It’s not necessarily that Macs are better than PCs, but, for the Mac user, using a PC forces him to add to his knowledge of computers and apply his computer skills in a different way.The same has been true for us since we arrived in Uruguay.  While we were beginning to get a handle on Spanish, we discovered that the dialect spoken in Uruguay (Rioplatense) was significantly different from anything that we had encountered in Mexico or Spain.  Before arriving in Montevideo, we thought we were making decent progress towards fluency in Spanish, but, since then, we have learned that our learning curve in Spanish was made just a little bit longer by the necessity of adapting to a new dialect. 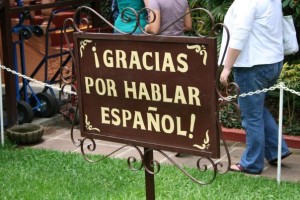 Maybe we can help you to understand by transporting you, for just a moment, to our neighborhood.  If we hear someone say, “Ella se cayó.” (pronounced ESHA SAY KAI SHOW and means “she fell”), that immediately launches a couple of thought processes in our heads.  We learned to pronounce it this way, E YA SAY KAI YO.  Once we have discerned the difference in pronunciation, we have another problem.  What we have heard could actually have two quite different meanings, because another phrase, “Ella se calló” (she quieted down) is pronounced in exactly the same way.  How can you know what the speaker meant?  It all depends upon the context in which it was said.  If Shiloh was making another attempt to walk and someone saw her fall and we see her lying on the ground, then they must have said, “She fell”.  If she had been crying and someone heard her stop when she fell asleep for a nap, then they must have meant, “She quieted down.”

Like all other languages, Spanish is influenced by the particular cultural context in which it finds itself.  The beauty of that fact is that it greatly enriches the language.  For us personally, learning the dialect that is spoken in Uruguay gives us the opportunity to expand our horizons and enter into the lives of those who live around us.  While, at times, it may seem like we don’t know Spanish, in reality, it is just another step in the process of learning to walk and talk like the people among whom we live and who we love.