Opening Day is just around the corner… for those who love baseball, this gives you an adrenaline rush and a hopeful expectation of what the season has to hold. For the Bridges family, it’s exciting because we love baseball.

Brad’s family has always loved baseball. Actually, it’s America’s past-time, right? They spent hours and hours on the ball field — whether it was practice, games, or just playing (in Brad’s case, his earliest memories are watching his brothers play game after game of baseball and picking off the signals from the other teams for his brothers 🙂. Time was spent in Florida for MLB’s Spring Training watching the Cardinals and the Orioles at Al Lang Stadium in St. Petersburg. When tickets were available at a deal, the Bridges boys and their dad went to the World Series too (1990, 1991, and 1993).
When Brad and I started dating, this baseball theme continued in our lives.

The summer before our senior year in college, Brad and I spent some time investigating and researching schools that we planned to attend for our masters degrees. During a trip, we had a stop in St. Louis — where little did I know Brad was planning on proposing. (This was in August…I was expecting Nov/Dec of that year — so it ended up being a BIG surprise.) So after a special moment under the Arch, a visit up to the top of the Arch, and hundreds of pictures later….we made our way to Busch Stadium (the former one) for a Cards game. 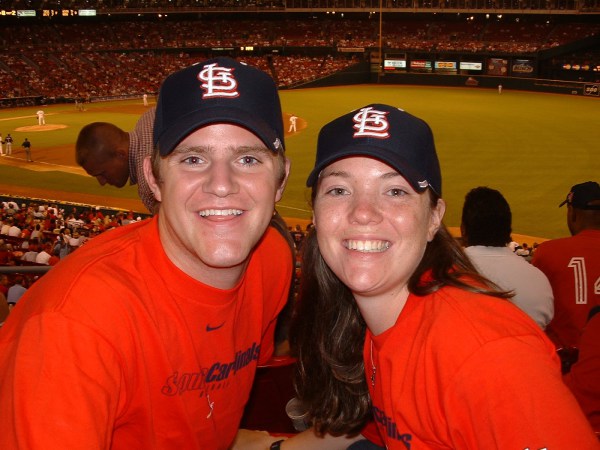 We had a blast celebrating and even fit in a few other games along the way (Cubs, Sox). The season ended and we finished up our last year of college with Brad in NC and me in TX.

Exhibit B: The Wedding

So in order to keep with tradition, after our wedding reception (June 12, 2004) we decided it would be fun to go to a baseball game with people who were in town — mainly Brad’s groomsmen, some buddies in town, and his brothers. It just so happened that it was the Cardinals again, but this time it was at the Ballpark in Arlington with the Rangers. 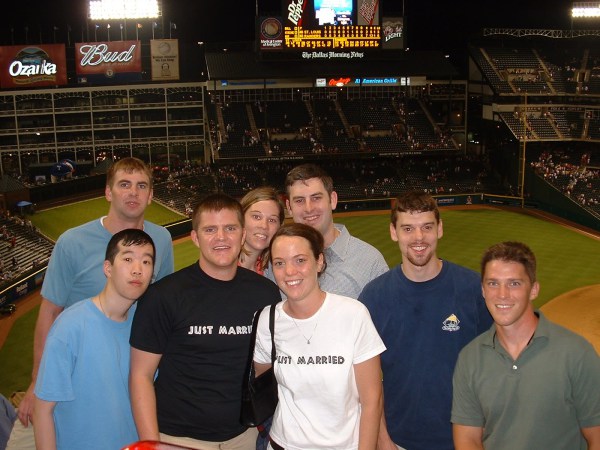 Yes, we got some weird looks and comments when we our answer to “When did you get married?” was “at noon today!”, but we had a blast with everyone and loved getting to celebrate with our friends.
Exhibit C: Baby???
So the ongoing joke since our marriage was that we needed to make sure that we went to a baseball game when we a) found out we were pregnant, b) had a baby, or c) something else to celebrate a new addition to our family.
When we found out we were expecting last August, we were all over the US as we spoke in churches and were involved in partnership development…so by the time the season was over, we didn’t make it to any games.
The other night we were meeting with some friends talking about baseball and realized that the home opener for the Rangers is April 5th and that there is another home game on April 7th (our due date). So we are thinking that if Baby Bridges hasn’t made her appearance by the 7th of April…we would love to go to a Ranger’s game to celebrate and make April 7th memorable no matter what — even if it doesn’t end up being the day our daughter is born.
So…what do you think? Anybody interested in going with us???! We’d love to make it a party. (We are serious…let us know if you’d be game.) Come help us make a Bridges family tradition live on…