After nearly three years of infertility struggles, we are excited and blessed to say that God has blessed us with a little one! We know that the Lord shows His faithfulness to us in ways that we don’t understand and that His timing is not always our timing…but the Lord chose now to bless us with a child!

We’re sure that you want the story of this huge blessing, so here it goes. After a year of trying to have children, we decided to see the doctor to see if there was anything obviously causing our infertility. After over a year of fertility treatments (pretty much everything minus InVitro), the doctor’s found Lindsey’s ovarian tumor in December 2008. She had to have surgery in February 2009 to have the tumor (the size of a grapefruit) removed. They could not save the ovary…so they had to remove her right ovary. During this time, they also discovered that she had endometriosis, which was not known about earlier.
When the pathology of the tumor came back as really rare and potentially malignant, they decided to do surgery once again — this time taking biopsies of her entire abdomen in March 2009. This was another major surgery that Lindsey had to go through only 6 weeks after her first one. (See Update for this surgery.) The results came back from that and were relieved to hear that nothing had spread and they were able to get the entire tumor out with the first surgery!
Whew…those were two surgeries that we were not planning on having during the Spring and not what we expected to be a part of our path but at least Lindsey had a quick and awesome recovery. She was blessed to be moving around like normal just 4 weeks after the surgeries!
Because of all the internal trauma Lindsey’s body had undergone in February and March, the doc said to wait to start trying for children until this past July. We patiently waited and July we got pregnant! We were very excited and it took a while for it to sink in (still is!)…as we feared that something would go wrong; however, everything has been going great. 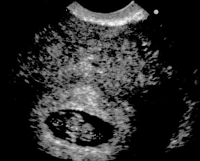 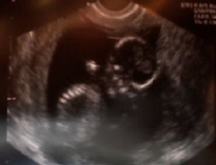 Lindsey is 14 weeks pregnant, and the Baby is due April 7, 2010. We had another sonogram this week…and although it’s still to early to know if it’s a boy or a girl, Baby Bridges is growing great. Lindsey has some autoimmune issues with her thyroid that requires some extra medication and treatment, but that has been going well and we are thankful that the infertility doctors had previously discovered this autoimmune issue. Please pray for the medications to continue to work and protect Lindsey’s body and our sweet little one.
We will be tracking with the doctors about our impending move and Lindsey’s health. Currently our plan is to move to Uruguay in January and deliver in Montevideo OR move in June and deliver in Dallas. Please pray along with us for wisdom and guidance about the best decision for our family.
Obviously, we are extremely excited as we have both been wanting children for a long time and can’t wait to be parents. Thank you for all your prayers through Lindsey’s surgery and as we struggled with infertility. You all have been a huge part of this journey and we are excited to continue to keep you posted on what’s going on with us!